Wandering Ear : getting ready for the 2000s 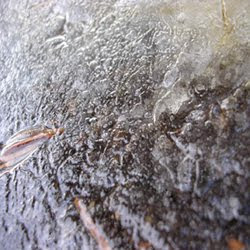 My friend Nathan Larson and I are getting off our duffs and dusting off Wandering Ear, a net label we co-curate to bring you audio related to field recording from around the world.

We're starting to think this whole Web 2.0 thing might catch on someday. So we've decided to add a Twitter feed and a fan page on Facebook. Adventurous, eh? Drop by if you care to.

A couple of new releases in the works too, so stay tuned...
Posted by juniorbirdman at 9:29 AM No comments: 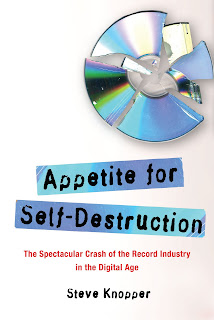 I recently finished "Appetite for Self-Destruction: The Spectacular Crash of the Record Industry in the Digital Age" by Steve Knopper, and I found it a very illuminating read. I certainly knew the music business has become a bloated behemoth, but I wasn't aware of just how bloated till I read this book. The magnitude of hubris, greed, and sheer waste is nothing short of staggering, and keeps the pages turning with the urgency of a trashy true-crime account.

Along the way we get detailed accounts of 90s artifacts I recall only as media constructions burnished by rumor and hearsay. Knopper raises the curtain on Napster's hapless mismanagement, and the tale of warring boy band managers-- one winding up relatively broke, another one of the richest humans on the planet-- is epic and riveting.

The issues surrounding downloading, intellectual property and the cultural marketplace are complex indeed, and one's positions on them are easily influenced by the distinct vantage points of creator, seller, or consumer. But this book brings to mind something I've been thinking about lately: any economy to some degree thrives on deprivation, and if that deprivation is surmounted, then the dependent economy will collapse (or be replaced by others).

Many arguments justifying downloading contend that "labels are ripping off all the artists anyway" (as if the speaker has thoroughly researched each artist's career before proceeding) or "labels are ripping me off with how much they charge for CDs" (generally quite true). But I think it's important to acknowledge that the real reason we download is the same reason so much other digital technology has flourished: it allows us gratification not only without spending money or leaving the house, but in fact without even getting off the couch.

I don't have any real point to make here-- but that's never stopped me from blogging before. Suffice to say that the current music-biz landscape of 360 deals, licensing, ringtones, and the like is fascinating and-- as a former co-worker of mine used to observe-- "weird". Anyway, I recommend this book if you're interested in a recent history of the music biz and its calamitous decline.
Posted by juniorbirdman at 8:42 AM 1 comment: