I've recently had the pleasure to design sound for a work in progress called Symptom, developed by The BodyCartography Project for a SCUBA Touring Network showcase at the Southern Theater in April 2010. (The video above documents the Southern Theater performance; below is an earlier iteration of the piece at Judson Church in NYC.)

The company states an intent for the piece to "investigate notions of social bodies versus biological bodies, tease out dynamics of sibling rivalry, and explore the gaps between seeing, knowing and empathy... We want to investigate the disparity between what people see and what they feel that they know as fact. We want to find out if we can alter what viewers visually observe and change what they know, or conversely, if we can change what they know and thereby change the way they see." 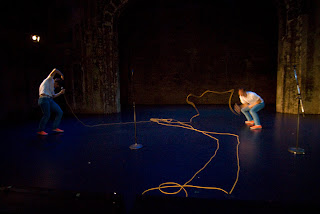 We developed a 20-minute version of the piece over the course of about a week and a half, experimenting to discover how the intent could be brought to life onstage. As part of the visual score, brothers Otto and Emmett Ramstad spend a good deal of time posturing with microphones, embodying a physical vocabulary of public address-- sometimes speaking but often defying the expectation that a physical gesture with the mic will necessarily be accompanied by speech. By the end of the piece, the mic cables (chosen specifically as bright yellow for this outing) created a design across the stage floor by means of the dancers' movements: 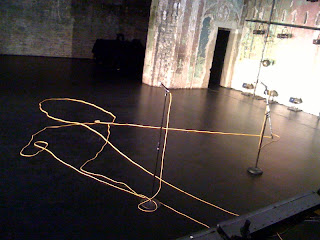 To portray a gap between sensory input and perception, I sampled the Ramstads' voices as they spoke and held the sound for playback during subsequent passages. The notion of looping perception also lent itself to the use of feedback; a section of the piece uses live noise generated when the dancers move close to an amplifier that's wired to a feed of the audio from the PA. The resulting feedback then crossfades into a piece I composed [mp3] that starts as a piercing whine and morphs into distorted harmonies before dissolving into an echo. To superimpose one perception over another, I also recorded the dancers at work in the creaky rehearsal space [mp3]; we superimposed this over the dancers' movements during the performance at a fairly high volume at one point.

Posted by juniorbirdman at 10:06 AM No comments: 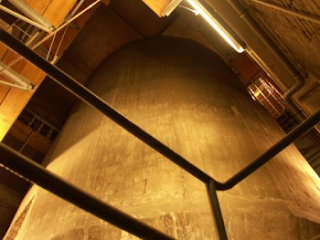 A web site where you can upload a sound and have it played back in a huge water tank. How have we lived without this till now?
Posted by juniorbirdman at 10:42 AM No comments: 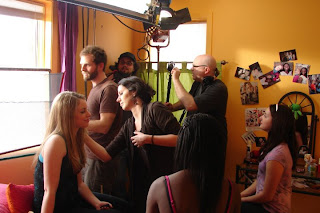 Recently I've been working as the location recordist on a film project involving issues faced by contemporary teens.

The concept is still evolving, so I'll quote the official copy from the site of The Directors, which states it's "producing its first film this spring for a new start-up company, ACTivation. With a working title of Set to Spark, by Trista Baldwin, this will be the first film in a library of online content that ACTivation will make available to teachers, parents, community leaders and other youth influencers."

I've been having a blast working with director Steve Barberio, cinematographer Kevin Obsatz, producer Tim Wilkins, and a host of talented performers and technicians. We'll wrap the shoot in the coming week, and then I'll head into the studio and get to work on editing post production sound. Looking forward to it.
Posted by juniorbirdman at 1:50 AM No comments: