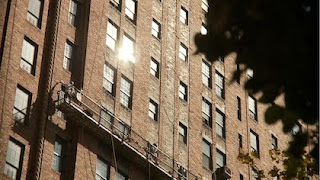 I'm really liking Walker Art Center's practice of screening short films on a loop in the lecture room during gallery hours. Yesterday I had a chance to pop in for Last Address, Ira Sachs' 8-minute piece.

The film consists entirely of static footage shot outside the last residences of New York artists who died of complications from AIDS. Many shots feature tree branches that twist and hiss in the wind (Damian Volpe does a fine job of keeping the potential problems of wind sound under control), evocative of life's fragility as the imagery bears witness to mounting loss. An elegiac and refreshingly simple film.
Posted by juniorbirdman at 8:25 AM No comments:

The Future Is You 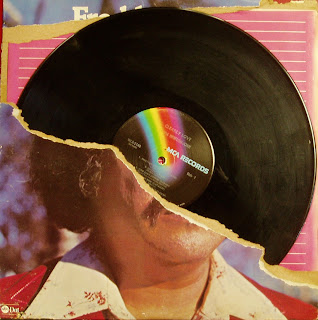 From time to time I sit in with Brown Rainbow, an amorphous project with no fixed personnel and a carte blanche approach to music making. A recent session gathered Charles Gillett, Bryce Beverlin, Rich Barlow, and myself in Charles' basement.

The result: The Future Is You (available for free mp3 download at the preceding link). An entire day in the making from showing up at the house place to final upload of the recordings and cover art, "The Future Is You" is easily the most important statement to emerge from Charles' basement in the past month or so.

I play synth (via laptop) on "Implied Chariots" (so named because the melody seems poised to segue into "Chariots of Fire" at any moment but never does), the title cut, "The Twinkling" (my favorite of the bunch; I don't think I've ever heard a track featuring sax, banjo, and Moogy synth bass before, though who knows), and "The Tits on Those Mannequins", drums on "Animal Insides", "You Don't Have to Worry" and "The Yellow Rose", and banjo plus tambourine on "Just Slip Further".

The samples I'm contorting on "Better to Have It and Not Need It" are mostly wilhelm screams. Charles got a lot of lyrics by reading out of books; Bryce got the lyrics for the title track from spontaneous divine inspiration. Trevor sketched us while we played; I'm hoping the art will show up online eventually. 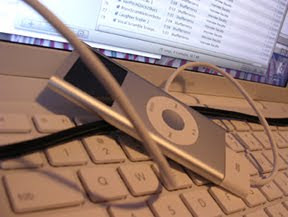 Nice NY Times article about the decrease in fidelity that's accompanied the rise of mp3 and its playback devices.
Posted by juniorbirdman at 12:23 AM No comments: 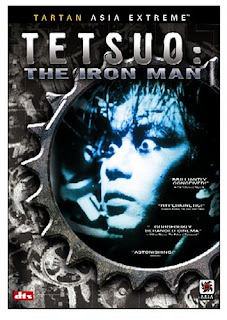 I finally got the chance to see Shinya Tsukamoto's Tetsuo: Iron Man recently, and I wasn't sorry about it. Crafted with obsessively detailed lo-fi art direction, shot in 16 mm black and white in a pileup of vertiginous angles, and spliced into a rapid-fire frenzy that proposes the spectacle of "Eraserhead" on speed, the film plunges into a cyberpunk netherworld where nature appears to have vanished altogether. All that remains is a wilderness of discarded machinery, piles of scrap metal and and rows of rundown buildings. The relentless pounding and slashing of Chu Ishikawa's industrial score drives the frenetic visuals.

The victim of a hit-and-run car accident, a "metals fetishist" (played by Tsukamoto) takes his revenge on the businessman responsible (Tomorowo Taguchi) by transforming the latter into an amorphous cyborg. Machinery literally bursts forth from Taguchi's body, overtaking him in a harrowing sequence that recalls the fusions and fetishes of early Cronenberg films. 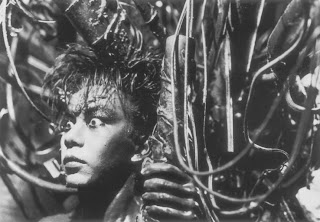 Tsukamoto tells his victim that the violation will open his eyes to a "new world". Indeed, one is reminded of J.G. Ballard's novel "Crash" (the denizens of which fetishized car accidents as an apocalyptic cybernetic paradigm), adapted brilliantly by Cronenberg in the mid-90s. (imdb says the film adaptation references "Tetsuo" somewhere; I'll have to go back and check that out.) We get the sense that Taguchi's transformation may be a hallucination, and/although the visions that accompany his ordeal are often viewed on a TV screen-- technology mediates his thoughts just as it augments his body. 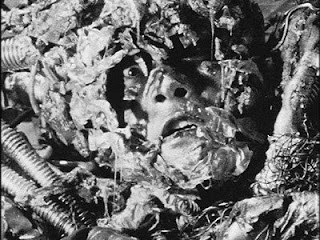 Infector fuses with infected as the film lurches toward a conclusion that demands a sequel. In fact, Part III of the franchise is due in 2010, and I hope that'll make Part II more readily available in the West than it appears to be now. I've read that the second film is even better than the first. And given that this is one of the most compelling films I've ever seen, that is something to look forward to.
Posted by juniorbirdman at 8:28 AM No comments: