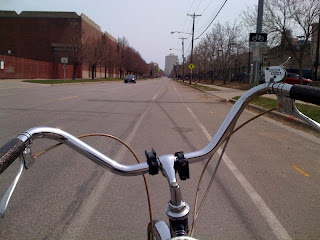 I've become obsessed with bicycling in the past year (bisected though said year has been by one of the most brutal winters I've ever experienced). The path I take from north Minneapolis to downtown is lovely, and I've been thinking about trying to record it for quite some time. This past Sunday I decided to do so. The result:

I used some in-ear binarual mics and wore a winter cap while I rode to try to cut down on wind noise. The resulting recording was largely overwhelmed by wind noise nonetheless, but a few passages were placid enough to be "legible" and I found that by pushing the high-pass filter I was able to filter out enough noise on other areas to make it a pleasant enough listen even if it is a little thin. From the original twelve-minute recording (the battery in the minidisc recorder ran out by then) I was able to salvage enough chunks to put together about four minutes by crossfading pieces together. I think it works much better on headphones than on speakers.

At about 2:49 a car pulling a trailer full of junk clatters by. I'm not sure what the fan-type droning at about 3:12 is; my guess is it's some sort of ventilation system in the building I was passing.

There are all sorts of recycling centers and other ill-defined warehouse type places along the route. At some point I want to stop and record all the clanging, banging and crunching along the way (which only happens during the week). It'd make a nice sound map I think.
Posted by juniorbirdman at 8:46 PM 1 comment: