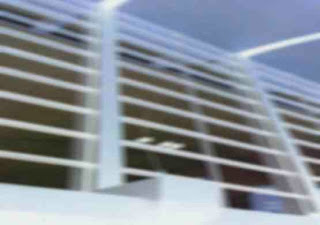 Some sounds I've been developing for my Sound Spandrel: Science Museum performance, part of the Northern Spark festival on June 4th, 2011. NOTE: Hours for the Sound Spandrel event have been revised to 11:30 pm- 2 am. Unlike most of the festival, this performance will not last all night.

The performance will take place in the lobby of the Science Museum of Minnesota in St Paul. The only real direction for performers is to make sound that somehow responds to the space they're in. 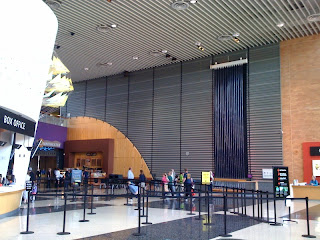 I made a series of recordings in said lobby recently, and did some work filtering the sounds to isolate the frequencies that seemed relevant. I've spliced up the resulting audio for use in remixing. The Sound Spandrel focuses on the sonically marginal and parenthetical, so I zoomed in on as tightly isolated samples as possible to accent the peripheral and easily overlooked. While much of the performance will be delivered via acoustic instruments, I (and perhaps other performers) will use these samples as source material for remixes.

I excerpted various sounds from these recordings, most elementally the basic percussive sounds of things like the pressing of a button on the cash machine, cutting off the connection on the public phone, and the closing of a locker and a door. Using follow actions in Ableton Live, I created a stack of samples that would sequence all these brief "ticks" as a rhythmic grid that randomized playback in a generative manner, varying the rhythmic pattern infinitely while forcing it to adhere to a pre-determined meter. Then I complicated things by adding sounds of clangs and bangs, processing said clangs and bangs using Live's grain delay filter.

Similarly, I chopped up and sequenced the ambience of the lobby (as well as the incidental footsteps and impacts therein), and tried a little processing of that too. 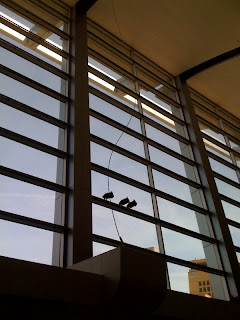 If you look closely in the above image, you'll see a sine wave-shaped line vertically bisecting the image. This is one of two spinning wires hovering over the front doors of the lobby. I found that by aiming a boom mic at one of these and heavily filtering the recording, I could fairly well isolate the frequencies at which the spinning wire resonates. Then, of course, I manipulated the result.

A sculpture next to the information desk pumps bubbles through fluid; you can see it stretching to the ceiling toward the right in this post's second photo down. I recorded the clicking of the valves and created a generative sequence in Live's follow actions, varying the pitch of each slice and including a backwards version of each for a little more variety. Then I tried the good old grain delay for a processed version.

And below is a montage employing all of the above in a sketch of what I may or may not be doing as part of the performance. This is a real time improvisation in Ableton Live.