I honor the memory of Twin Cities lighting designer and friend Jen DeGolier, who recently passed away at the age of 36. That such a lovely soul has departed this world so young has been sad news indeed.

My work of late has been more often for the screen than for the stage, so I hadn't seen Jen for a while, maybe even a year or two. And I wouldn't say we were bosom buddies or anything like that. But it wasn't difficult to bond with Jen. I have many fond memories of spending long nights with her on ladders, in a tech booth, and of course at a bar or three. I'll never forget her smile, her laughter, or her wit. Even when I knew the work would be long and hard, I always looked forward to it if Jen was involved. Everything was a ton better when she was around.

Widely acclaimed, Jen's lighting design was uniquely diaphanous. Productions she lit always had something of an unearthly glow about them, a sumptuous, otherworldly atmosphere. It was a gorgeous sight.

She was a devoted Star Wars fan, and she sang some mean Bon Jovi karaoke. She loved animals too. And she was one of the first people I ever successfully rickrolled.

Jen also loved dinosaurs. I decided we had to have a movie night when I discovered she'd never seen the original Willis O'Brien "Lost World" or O'Brien protege Ray Harryhausen's "Valley of Gwangi", my two all-time favorite dinosaur movies.

Unfortunately, we had to cancel both nights we arranged to do this-- I was sick once, and I don't remember what the other dealbreaker was. So I'm sad that it never happened. But if there's a heaven, I know Jen's there, and I know there'll be lots of real dinosaurs there to play with. And she'll finally know for sure whether they had feathers or not.

Posted by juniorbirdman at 11:13 PM No comments: 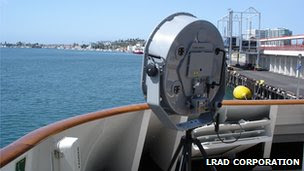 According to this BBC article, "The Ministry of Defence has confirmed a sonic device will be deployed in London during the Olympics". Despite the device's ability to "emit a beam of pain-inducing tones," we're assured that it'll be more in "send verbal warnings over a long distance" mode. And although this "device" has been used "to repel Somali pirates" and in Iraq for "crowd control", we're to understand that it's certainly *not* a weapon. (It will, however, soon be in use in the United States as well.)

Why even bother with the doublespeak? As the roles of police and military continue to blur in the West, it's clear that the capacity to crush dissent grows increasingly as a priority. The Obama administration has, frighteningly, refused to dismantle the national security regime established by its predecessor. And just as stirring speeches embody a deft deployment of sound to the end of persuasion, this new weapon-- excuse me, device-- offers a new entry in the growing field of acoustic coercion.

Posted by juniorbirdman at 10:34 AM No comments: