I got sick this past Thanksgiving weekend, which, while not so great in the productivity department, definitely upped productivity in the movie watching department.

On the recommendation of my wife, the household's resident documentary expert, I watched Indie Game: The Movie, which I quite enjoyed. But the treat I'd been waiting on was the the disc recently arrived from Netflix-- which, if not for my compulsory leisure status this weekend, I just plain wouldn't have had time to watch. And that would be Iron Sky.

I first saw the teaser trailer for this movie at a couple years ago, and I was pretty much knocked out by the silliness of its awesomeness. Conspiracy theories involving the moon have always been among my favorites (though there's no beating "Paul McCartney is dead"), and the idea that the Nazis escaped in the confusion ending WWII, absconded with their nascent anti-gravity technology, and set up a secret base on Earth's moon, biding their time till they return to invade again is simply a brilliant one. Love it!


(One time my wife and I told her grandfather, a World War II vet, that some people thought the Nazis had escaped and were living on the moon. He grinned and said "Well, good. Let 'em stay there.")

Anyway, "Iron Sky" takes this notion and pushes it pretty much as far as it can go. Not only do the Nazis have an awesome moon base, but an ornate swastika-shaped moon base at that. Their technology has that secret-tech steam-punk retro-advancement thing going on: they've developed Hindenburg-esque super-weapons named after operas in Wagner's ring cycle, and even by the year 2018 one of their computers fill up an entire room. They're shown up by a captured American astronaut's cell phone, which turns out to pack the power they need to operate one of their super weapons. There's lots of humor involving propaganda, motivational music and what have you. 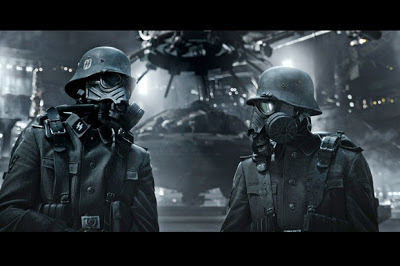 So far so good. But the plot takes a weary turn when a Nazi away team is suddenly plunged into contemporary Earth life (near-future, anyway-- Sarah Palin has apparently become President), and things get tiresome in the way those scenarios almost always do. "Brother from Another Planet" it ain't.

Speaking of which... the real weakness of this movie, I'd say, arises from the fact that the film doesn't satirize Nazi racial attitudes with the same light touch as it does other aspects of Naziism. While its heart appears to be in the right place, the film's engagement of ethnicity comes off a little sideways. The captured American astronaut, who happens to be black, receives a skin treatment that disguises him as a Caucasian for the purposes of the away team's mission. Interesting choice, there... I'm on board for that.

But the scene in which the team encounters a group of African-American men playing basketball is kind of painful to watch. When antagonized, these men drop what they're doing and, to a man, pull out heavy duty handguns and immediately begin shooting. Oh, and by the way, this is apparently supposed to be for comic effect. One more movie where the only inner city black men we get to meet are cold blooded killers. It's kind of like you're suddenly in the middle of an 80s studio comedy. And this from Euopean filmmakers, who otherwise appear to be of progressive sentiment. Sigh.

I'm not trying to make a mountain out of a molehill here, but the film does foreground ethnicity, so it seems worth a mention. "Iron Sky" is certainly a lot of fun-- there's a lot I haven't mentioned, like Laibach's score borrowing liberally from Wagner. Could have been better though. That's all I'm saying.

Posted by juniorbirdman at 1:50 PM No comments: