Track of the Week: Spot

This week's original composition by yours truly:

An understated, unhurried, chordal/ melodic progression that hovers in the air as if just barely there. I actually went back and remixed it quieter, so it'd sound like it was in the background regardless of playback volume.

Part of the Melodic collection in my Music Library.

Posted by juniorbirdman at 10:19 PM No comments: 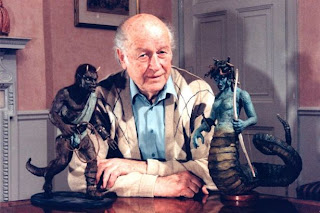 I honor the memory of Ray Harryhausen, pioneer of stop-motion animation and hero of my own creative imagination since I was a kid. With his recent passing, I've thought a lot about what his work has meant to me over the years.

When my brother and I were kids, my dad told us Greek myths as bedtime stories. We had books illustrated with paintings of all the monsters and what have you, but what a treat it was to be able to sit down and watch "footage" of, say, Jason's quest to capture the golden fleece:

When he was a kid himself, Harryhausen was inspired to pursue his life's work when he viewed Willis O'Brien's special effects on the original "King Kong".

O'Brien, of course, was the mastermind behind the 1925 dinosaur classic "The Lost World":

Harryhausen later went on to work with his muse O'Brien on "Mighty Joe Young", a film that remains among the best work of both artists:

Given the tendency of Harryhausen films to mine the world's mythologies as source material, the narratives of his films-- particularly those that echoed O'Brien's-- tended toward a compelling "shadow" of Joseph Campbell's monomyth.

Whereas Campbell noted that "the hero comes back from this mysterious adventure with the power to bestow boons on his fellow man", there's a weird anti-narrative that develops through "Lost World", "Kong", "Mighty Joe Young", and subsequently Harryhausen's "The Valley of Gwanji" (one of Mr. H's finest, in my opinion):

In each of these films, someone returns from "mysterious adventure" not with "boons" to bestow, but with a monstrous being upon which the bringer hopes to capitalize. This plan, of course, invariably goes awry; the monster escapes its shackles and wreaks havoc on its immediate locale, entertaining us along the way.

In the cases of "King Kong" and "Mighty Joe Young" especially, the unleashed creature is portrayed with a sensitivity allowing a certain pathos-- linking it with classic sympathetic monsters like Dr. Frankenstein's. But in the same Promethean vein, the stories look ahead to mythoi like the "Alien" franchise-- where, while the desire to profit from monstrosity remains, sympathy for the monster is nowhere to be found, and the consequences are far more dire.

A possibly unrelated postscript on Ray Harryhausen, and I'll let you go. Check out this trailer to "Earth Vs. The Flying Saucers", one of his early films. Notice how the tonality of music and sound effects are so often in key with each other.

Isn't that cool? I don't know how this happened, and I doubt it had anything to do with Ray Harryhausen himself, but it's just one more particle of fairy dust that's floated around his work all this time. Thanks, Mr. Harryhausen, for everything.

Mike Hallenbeck home page
Posted by juniorbirdman at 7:36 AM No comments: 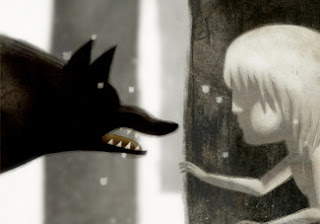 Interesting article on sound design for animation in this month's issue of Post Magazine. Unless I'm missing it, it's not available online, so snag a copy of the print version if you want to read it. (Subscriptions to the magazine are free, btw.)

In any case, it's great to discover people's methods for gathering sounds, check out the gear they're using, and hear stories about folks gathering sounds in their own homes or going on sonic safaris to capture those elusive ambiences and events. Thanks Post!

Track of the Week: Bike Music

Some original music by yours truly: a spindly mix of sounds derived entirely from the operation of my bicycle!

Part of the musique concrete collection in my music library.

To create this piece, I chopped each individual sound event into a discrete sample. Using follow actions in Ableton Live, I created a couple of sample groups and randomized the order of playback for each, running them simultaneously with a different interval of autopan assigned to each group. The result: a grinding light industrial groove, chaotic but still tied to a pulse of sorts. It has a lot more to do with the kickstand than I expected it to.

Mike Hallenbeck home page
Posted by juniorbirdman at 7:27 AM No comments:

First heard about this via the Twitter feed of the audio department over at Splice. Still haven't heard from anybody who's used it, but I'm very curious!

AudioSteps is apparently a plug-in that facilitates footstep performance. It evidently allows for an assortment of footwear, different parameters of ambient processing, various materials in contact with the sole, and adjustable moisture:

If anybody out there has used this, please drop me a line and let me know how your experience has been! 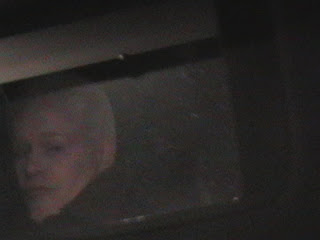 A long (and I mean long) -term film project from my friend Bryce Beverlin and his friend Kurt, deathproj is finally seeing the light of day. I'll leave it to the film's creators to explain the content, but if you live in the Twin Cities you can catch screenings this month. Check the schedule for details.

I've seen one screening so far, and I was really impressed by the equal helpings of conceptual integrity and droll humor. The filmmakers are content to let the seams show, often hilariously so, to a point where often you're pretty much seeing the seams and that's the movie.

The music and sound design are really impressive as well (the two overlap to a point where it's hard to tell where one stops and the other begins). Subtle tonalities and slow changes over time pull the film along like a really, really slow tugboat. It's a pleasure to experience.

I'll be catching Star Trek and Iron Man 3 this summer for sure, but I have to say it's stuff like this that makes my viewing life complete. Thanks guys!

Posted by juniorbirdman at 9:28 PM No comments: 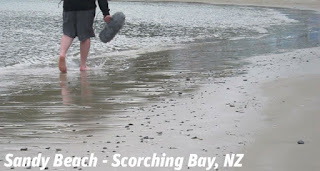 Thought I'd take a moment to praise a sound library I've been using a lot lately: the Water Foley collection from Hiss and a Roar, assembled by New Zealand sound designer Tim Prebble.

It's a broad collection of hi-res water-related sounds, both interior and exterior. Content ranges from light taps to massive splashes and everything in between, including kicking, thrashing, oar movement, surfacing, wading, mud suction, push-offs, treading water, and vehicle drive-throughs. Nice long tails at the ends of soundfiles, for easy crossfades.

I've been really impressed with the variety of material; pretty much any water-related element I've needed so far has proven available. Many sounds come in matching stereo sets for surround mixing, if that's your thing. This also allows a choice between close-mic'd and more distant perspectives.

Posted by juniorbirdman at 7:31 AM No comments:

Track of the Week: "Kaiju Stomp"

Some original music by yours truly...

One of many pieces to be found in my music library.

Posted by juniorbirdman at 7:28 AM No comments:

An animator friend recently turned me on to Axe Cop, and I'm forever grateful.

The big attraction here is that the animator's 5-year-old brother comes up with the stories, which are then faithfully brought to life by adults. The results are about as awesome as one might think:

I highly recommend the "Moon Warriors" material as well:

This is, in essence, what I'm talkin' about. There's a lot of this stuff, and it's pretty great. Have at it, Internet.

Posted by juniorbirdman at 10:28 PM No comments: 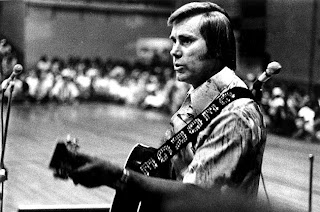 This planet lost a legend with the recent passing of country singer George Jones. In my book, Jones was one of the all-time great singers-- soulful and subtle, throaty and velvety, but raucous and rowdy when the song demanded it.

It's hard for me to pick a favorite George Jones track, but if I had to I think I'd go with "Mr. Fool":

The melody that accompanies the second syllable of the "before" in "I will never be the fool I was before" is really hard to sing (try it), but Jones pulls it off like it's nothing. Brilliant.

I'm also quite fond of "A Good Year for the Roses":

I kind of want to call this song "a country music 'Day in the Life'", but it isn't really. It is, however, really sad and somehow believable as a window into Jones' personal life.

Speaking of which: Jones' issues with drinking are well-documented, but worthy of mention to demonstrate that he's pretty much the archetype of the wild-living country star. Long before the Replacements delved into the form, Jones made a habit of concert truancy that earned him the nickname "No Show" between his first and last.

One never would have called Jones lazy in pursuit of a drink. I'll let the George Jones Wikipedia page tell my favorite story about him:

"One of the best known stories of Jones' drinking days happened when he was married to his second wife, Shirley Corley. Jones recalled Shirley making it physically impossible for him to travel to Beaumont, located 8 miles away, and buy liquor. Because Jones would not walk that far, she would hide the keys to each of their cars they owned before leaving. She did not, however, hide the keys to the lawn mower. Jones recollects being upset at not being able to find any keys before looking out the window and at a light that shone over their property. He then described his thoughts, saying: "There, gleaming in the glow, was that ten-horsepower rotary engine under a seat. A key glistening in the ignition. I imagine the top speed for that old mower was five miles per hour. It might have taken an hour and a half or more for me to get to the liquor store, but get there I did.""

I finally got to see George Jones perform in 2010, at the Freeborn County Fair in Albert Lea, MN with my wife and my mother-in-law. I have to say he wasn't in fine voice, but he was very gracious, and it was a treat to see one of my all-time favorite artists perform. So long, Mr. Jones, and thanks for the beautiful music.

Posted by juniorbirdman at 9:58 PM No comments: