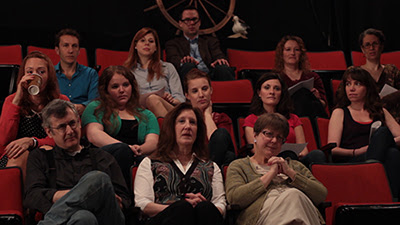 Part 4 of my thread detailing the process of creating an original musical score for the web series Theater People. This week: Mambo meltdown!

Episode 4, The Unkindest Cut, portrays callback auditions for Theater Unhinged's production of "Romeo and Juliet". Co-artistic director Dave (Steve Sweere) stacks the deck such that callbacks for Juliet require each actress to read a scene wherein they kiss him passionately, more than once, while his ex-wife (Stacia Rice as Elise, the director) looks on. Nothin' but class, this guy.

I knew there was a lot of action to cover in this episode, so it made sense to spice things up with something tense and energetic. Hence: Mambo Madness!

As with the DNA of most cues on this show, the chord structure harkens back to that of the main title theme.

At the cast viewing, somebody totally busted me on the "Sex and the City" vibe. Ha... didn't think of that consciously, but I guess so. Works for me.

Here's the music in context with the scene:

Posted by juniorbirdman at 7:55 AM