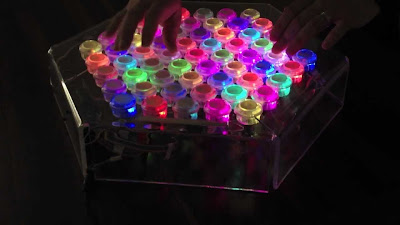 Just read an intersting article in the current issue of Sound on Sound (doesn't seem to be available online, but here's a similar one) about the Rainboard, a forthcoming MIDI controller from Brett Park.

Rather than the usual layout of piano keys, rectangular rows of buttons or the like, the Rainboard offers a clustered grouping of controls I find really interesting. As the relationships between keys are completely programmable according to whatever parameters are desired, the potential to develop and cultivate intuitive note relationships is compelling indeed.

Here's a short video where Park demonstrates the Rainboard:

And here's a performance video:

Posted by juniorbirdman at 12:04 PM No comments:

A branding piece I helped develop for the Sparkhouse division of Augsburg Fortress Publishers. I assembled sound effects and created custom musical elements to accompany the animation.

The brief was to come up with something reminiscent of PBS branding, finding a home for the piece in the realm of educational programming. I received a rough animation file and took it from there.

Originally I made the opening segment depicting the house shape's assembly much bigger and thumpier, as in the construction of an actual house. Eventually the creative direction became that the convergence of forms resulted in a smaller object, portraying the company's own creative work as opposed to the creation of the company itself. Hence the more intimate clickety-clack as the pieces notch into place.

We also went a few rounds as to how to acknowledge the spark and fire elements, in an effort to keep it subtle but still clear. For a while we had a variety of fire-oriented sound effect options in use, but all were discarded in favor of articulating the flame musically. I think this was a wise direction; music underscores the imagery in a much more imaginative way.

My favorite part of the spot: the chord that fades in with the word(s) "Sparkhouse" shimmers and wobbles a little bit, recalling the dance of an actual flame. It's an accident due to the routing of plug-ins within the audio session, but I left it alone since it communicated so well.

Posted by juniorbirdman at 7:38 AM No comments:

My Lady Gagged On A Pecan: Word To Your Mother-In-Law #1

My mother-in-law Joan Graham has long been frustrated by her attempts to parse the lyrics of rap songs. The fast-paced syllabic deluge often leads her interpretations astray.

Fan of misheard lyrics that I am, I've wanted to blog about this for quite some time-- perhaps as a series. The other night at dinner, I stumbled on my first entry. Joan told us she'd seen a rapper perform on Letterman the night before, and that she could swear the lyrics included the phrase "My lady gagged on a pecan".

Though I like to keep an open mind, I felt a bit of skepticism that this was in fact true. A quick social media APB garnered that the artist in question was Wale, performing "Love Hate Thing". Upon locating the YouTube clip and discussing it with Joan, it turned out it wasn't in fact Wale but backup singer Sam Dew she'd thought was relating the tale of his lady gagging on a pecan... repeatedly and at some length, it turns out:

I guess I don't really hear anything about pecans in there. But what do I know?

Thanks to Joan for being such a good sport about this.

Posted by juniorbirdman at 7:33 AM No comments: 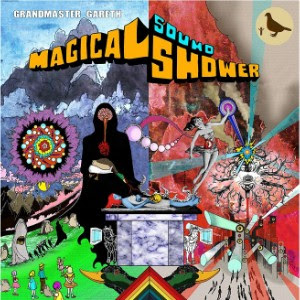 Been very much digging this guy's rekkids lately.

Befitting these times, when words like "authorship" and "authenticity" are more troublesome than ever, G.G.'s work renders it almost impossible to tell what's "original" and what's a "sample", or even what that means anymore.

"Magical Sound Shower" is an even funkier/ more epic project that at least sounds like it involves more original elements-- replete with stuttery scramble, juicy polyrhythms, dub depth, plus lots of itty bitty nuances and assorted rabbit holes of subtlety to tumble through.

Posted by juniorbirdman at 1:20 PM No comments:

Mixing for the Web 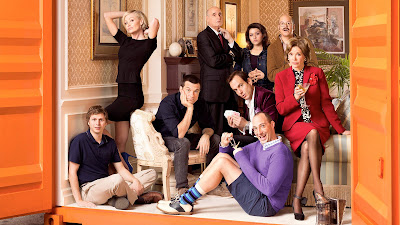 More and more projects I work on appear online, either as a primary destination or as an afterthought of some sort. And as time's gone by it's become apparent that the Internet/ mobile space/ etc is kind of a Wild West situation in terms of audio consistency; there isn't really much info out there in terms of standardization. How loud should a mix be? How does EQ come into play? How to frontload against loss in resolution? One is left to test a mix on available devices and hope it tracks across platforms.

So I was happy to see this article in Post Magazine, which deals with the pleasures and terrors of mixing for the web. The audio team behind the online reboot of "Arrested Development", for instance, reveled in the opportunity to apply its own standards and ensure consistency across the entire show.

On the other end of the spectrum, a mix is often at the mercy of whatever process crunches the final piece into an online-digestible morsel. From the article: "After seeing the full HD version of Burning Love: Burning Down the House during playback at Paramount, [re-recording mixer David Miraglia] was surprised by how it looked online. 'When they have it on the site in that small window, you can see compression artifacts. The picture wasn’t as bad as the sound I thought, but, really, who is at the wheel? Who is doing the encoding? I really want to talk to them and say, ‘Why are you doing it like this?’

“There are no standards," Miraglia continues. "You never know if the ads that get played before and after your show will be louder or softer than the program. We did a lot of research on the levels of the videos out there, and what the ads were being mixed at. Everybody is all over the map... The Web is the wild, wild west, across the board, and you never know what you’re going to get until it airs. Then it’s like, ok, well, that’s how it turned out.”

Indeed, I'd appreciate the opportunity to see what's going on behind the curtain, even at Vimeo or YouTube, and to back-engineer my work accordingly. Given recent developments in broadcast, maybe Internet audio standards aren't far off.

Posted by juniorbirdman at 7:49 AM No comments:

The latest in my behind-the-scenes exploration of composing original music for the comedy web series Theater People.

In Episode 6, Cock Blocking, a montage tells the story of the characters trying to unwind after a stressful day.

In any case, this dream-rock music turned out to be the perfect cue to accompany the sequence as deep thoughts on the part of Elise (Stacia Rice) eventually result in a fateful phone call:

Which is all well and good, but I gotta give director Matt Anderson credit for that one since I originally wrote the cue at his request for the following scene, wherein the cast and crew of the Aleister Crowley play elect to get stoned instead of, you know, teching during their tech rehearsal. The music also covers the end of the preceding scene, in which Dave (Steve Sweere) continues his quest to seduce Claire (Jen Rand), this time by showing up in her dressing room in his underwear:

I think the poignant voice of the Fender Rhodes keyboard makes this track work well in context(s). Weaving in with the rest of the score, this cue shares DNA with the piano jazz in the background of the party in Episode 2, Oh My God, I Should So Be Dead Right Now (which cue, in turn, derives from the main title theme). Same general groove but a little faster. It's a piano instead of a Rhodes here, with a different melody, maybe a little classier, more tipsy, less blunted:

Eventually we learn just how much more Edward needs.

Posted by juniorbirdman at 7:57 AM No comments:

The Films of Neil Breen 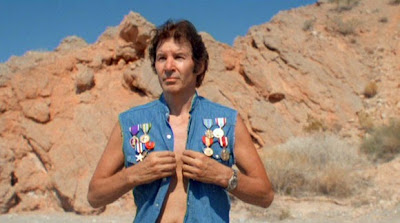 A bold new statement in American cinema, Neil Breen's work proceeds unconstrained by the boundaries that shackle most filmmakers of his era. His is a cinema of transgression: pacing, linearity and many other conventions do not hamper these films.

His work trods its own path. "Double Down", for example (available on DVD from Netflix as of this writing), kicks off with a full eighteen minutes of voiceover.

My understanding is that Mr. Breen's earnings as a Las Vegas real estate broker have enabled him to write, direct, and star in his films free of studio interference. Word has it that his more recent work ups the ante of his aesthetic even further. I lament that "Double Down" is Breen's only film I've seen to date-- I've been stymied in my attempts to acquire more. And I'd pay real money for this stuff.

I'm very excited for the opportunity to view "Fateful Findings", for example:

I'm also amped to witness Breen's messianic turn in "I Am Here.... Now" (note: four ellipses, just not three), annotated in this entry if you're interested. Here's the trailer.

Thanks to Melissa Kaercher for turning me on to the work of Neil Breen.

Posted by juniorbirdman at 10:19 PM No comments: