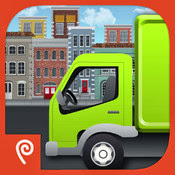 Delivery Truck Empire is a mobile game from Playtend, available for the iPad and iPhone. I contributed sound effects and custom music for the game, made for kids 4 and up. The player drives a delivery truck, picking up and dropping off packages while earning enough fuel to, as it were, keep on truckin'.

You can download the game for 99 cents here. Below: a brief promo video from Playtend.

For theme music, the producers wanted something that evoked old school 8-bit chiptunes. I proposed that we marry that approach to vintage Les Paul-style country twang, and the theme came to life:

I knew the music would be delivered in a variety of ways, from headphones to the somewhat tinny speakers on mobile devices. So I made sure the chewy bass line would punch on bass-capable headphones, but also retain enough bite to anchor the track via trebly iPhone playback.

My original draft of the music came across a little too busy and dissonant, so I simplified it on the second pass. Throughout I strove to maintain a level of human "imperfection" in the performances of both organic and digital elements.

I also put together a variety of sound effects for the project. These cues accompanied package pickups and deliveries, fuel powerups, and a crash. Here's an assembly of the sfx, over a passage of the theme:

I did my best to keep the sound effects in tune with the music.

Here's the rough animation file I was given to work with, posted with Playtend's kind permission. This was my only visual reference throughout the process.

Posted by juniorbirdman at 12:47 AM No comments:

Retrospective highlight reel of original music I created for the comedy web series Theater People, as well as for some spots promoting the show. Styles include mambo, bossa, rock, orchestral, ragtime, Dixieland, music box lullabye, and of course Satanic choral drones. Along the way we imagine a (fictional) musical theater adaptation of "The Shawshank Redemption", wherein I created accompaniment for director Matthew Anderson's lyrics.

The series is a ten-episode comedy using the Twin Cities theater scene as a backdrop. Over 10,000 views as of this writing-- not bad for a 100% indie production. The breadth and depth of talent with which I've had the privilege of collaborating on this show have been rewarding indeed.

When I asked Anderson what he was looking for in terms of a score, he talked about the use of music in Woody Allen films-- so I started thinking about tongue-in-cheek genre cues, and an approach to score that commented on the emotional reality rather than inhabiting it.

As usual, comedy leaves in its wake a wider variety of styles than any other genre. I've noticed this in the past, and wondered why... I think it might have something to do with the fact (as I see it, anyway) that comedy is often the least realistic genre; all that matters is that it's funny, and realism often takes a back seat. Hence, a wide variety of narrative strategies and styles comes into play to facilitate the various jokes and overall comedic arc. 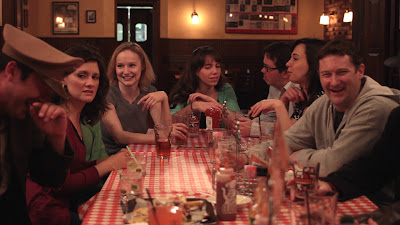 Here's a complete index of all the entries exploring the scoring process:

Posted by juniorbirdman at 2:42 PM No comments:

Kitty Plays With A Theremin

Posted by juniorbirdman at 10:41 PM No comments:

I Can Get On Ellen: Word To Your Mother-In-Law #2

Here's the latest documentation of my mother-in-law's struggle to decipher the lyrics of rap songs.

For my first explicit challenge (Joan encountered the previous entry on her own), I opted to kick things off with Eric B. and Rakim's classic "Follow the Leader":

I figured I'd go easy on her for the first attempt and send something relatively simple. Good thing too, as we'll see. I encoded the track as an mp3 with no tags, sending it to her without revealing the artist or title. Joan transcribed the lyrics as best she could and sent them back. Following are some excerpts of the original lyrics plus Joan's attempts to identify them.

First of all, I have to confess that I'm not at all sure what Rakim is saying in the song's first moment (repeated throughout the track), where we get a sample of what sounds to me like "Rakim-a-say". In any case, Joan heard this as "Rock Timothy", and Timothy makes repeated appearances over the course of her interpretation.

So let's get to some line-by-line comparisons:

Rakim's original lyrics: I can go on for days and days/ With rhyme displays that engrave deep as x-rays

Joan's interpretation: I can go on and on for days and days/ With my displays, super tax rates

Rakim: I can get iller than 'Nam, I kill and bomb/ But no alarm - Rakim'll remain calm

Joan: I can get on Ellen and all my killin’ forming really long, rocking with Mekong.

Rakim: I want to see you keep following and swallowing/ Taking and making, biting and borrowing/ Brothers tried and others died to get the formula

Joan: I wanna see Keith following, swallowing, taking meat, fighting, crawling. Rubber swine, mother’s got to get the form to her

Rakim: Cuts rip your pants/ Eric B on the blades bleeding to death/ Call the ambulance

Joan: Cuz rip your pants and pee on a plate/ Leave a deft, cold handyman

Rakim: By showing and proving and letting knowledge be born

Joan: I started a coup and let Niles be born.

Rakim: The stage is a cage, the mic is a third rail/ I'm Rakim

Joan: The stage is a cave/ The mic is a third rail/ A rock hymn

And boom, there you have it! A homemade fun and easy game.

Posted by juniorbirdman at 7:33 AM No comments:

Posted by juniorbirdman at 3:13 PM No comments: 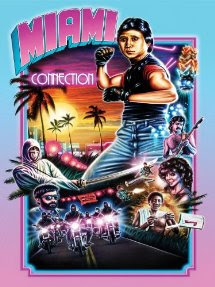 There's been a lot of buzz about Miami Connection lately, and I'm here to tell you it's well deserved. I've watched it twice on streaming Netflix, and I enjoyed it so much I ordered my own copy in the mail even though I can see it any time I want online. It's unquestionably the most compelling film ever to emerge from the Orlando, FL film scene-- heck, I'd widen that to all of central Florida.

Drafthouse Films' page about Miami Connection does a great job of condensing the film's Byzantine plot line: "Motorcycle ninjas tighten their grip on Florida’s narcotics trade, viciously annihilating anyone who dares move in on their turf. Multi-national martial arts rock band Dragon Sound have had enough, and embark on a roundhouse wreck-wave of crime-crushing justice."

Ambitious though this verbiage may be, though, it only scratches the surface of the movie's complexity. Kinship and business dealings complicate the narrative to the point where I've only gotten started unraveling it.

In the meantime, though, I've been enjoying the heck out of Dragon Sound's music. Though their T-shirts might suggest that Dragon Sound is a pizza restaurant or something, the boys (and girl) prove otherwise as they clarify their position as 100% "Against the Ninjas":

This scene, on the other hand, demonstrates a cinema unfettered by most usual filmmaking conventions:

My understanding is that Austin's Alamo Drafthouse originally discovered this film as part of a series randomly selected from a pile of reels rescued from a drive-in. If that's the case, my gratitude for this archaeology knows no bounds. And in conclusion, I'm going to post the image below for no other reason than that I just really want to. 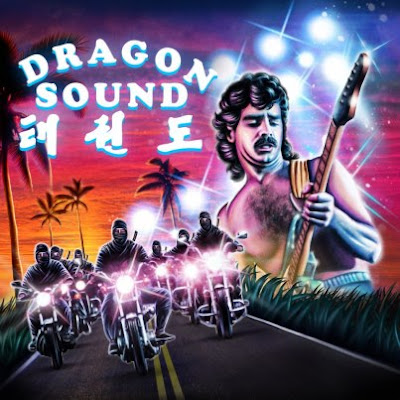 The final installment of my series detailing the creation of an original musical score for the web series Theater People.

Here we return to Satanic themes introduced earlier, as we learn in Episode 10 that Edward (Mike Postle) is indeed willing to surrender his soul to the Prince of Darkness himself (producer Crist Ballas in a cameo) for the sake of realizing a production of Aleister Crowley's lost play:

Matt mentioned the ritual music from "Eyes Wide Shut" as a guidepost here, which not only gave me some direction but also got me to finally watch "Eyes Wide Shut". I did what I could to channel some Coil-esque percussion sounds on this one as well.

The play turns out to be a garden farce called "The Minister's Trousers". Almost no one involved in the production grasps that it's intended as a comedy, as we see in the readthrough during Episode 5. I underscored this scene with a simpler version of the devil worship music:

Thanks for checking these out, and thanks to the cast and crew of "Theater People" for a terrific experience.

Posted by juniorbirdman at 8:44 PM No comments: