Back in 2013, Minneapolis' Ritz Theater invited me to present a piece as part of its Monday Live Arts series. I decided to explore, document and remix the space as part of my ongoing Sound Spandrel project.

In the discipline of architecture, the V shape between two arches is called a "spandrel"; negative space, but part of the design nonetheless. A site-specific sonic event somewhere between performance and installation, the Sound Spandrel foregrounds the marginal and the parenthetical to integrate music as part of a location's incidental soundscape.

Find out more about the Sound Spandrel project here.

Posted by juniorbirdman at 9:34 AM No comments: 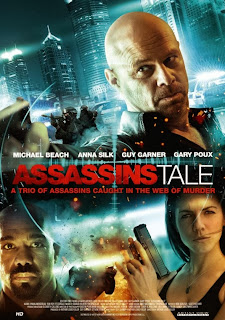 Assassins Tale is a feature film about hired killers in search of redemption, driven by an ensemble cast including Michael Beach (Sons of Anarchy, Insidious 2, The Abyss) and Lili Mirojnick (Friends with Benefits, Cloverfield).

Music supervisor Willie Wisely placed a few of my compositions in the film, including this atmospheric cue underscoring a scene where Grace (Anna Silk) confronts Anthony (Guy Garner) as he shoots heroin:

I also served as Foley artist and sound designer on the movie (highlight reel below). I created original synthesized ringtones for three characters' phones, placing each in an acoustic environment appropriate to the scene, and contextualized a narratively pivotal ringtone sampled from one of Wisely's original songs, placing it in a large parking garage as the phone is removed from a corpse's pocket.

I also created assorted impacts, water elements for a swimming pool drowning, and a sound effects tribute to "Lawrence of Arabia".

Posted by juniorbirdman at 10:44 PM No comments:

A quick mention of Tor Johnson's boutique sfx library New Sound Lab. I heard about it on the Designing Sound blog, checked it out and got interested in the unique (and affordable) collections to be found there.

Many of the offerings fall into welcome nooks and crannies, providing uncommon sources like Hybrid Electric Car, Rock Slides, and the two libraries I wound up downloading: Hard Drives and Optical Drives.

A preview of the Hard Drives library:

A preview of the Optical Drives library:

I decided these sounds would work perfectly for a short film I'm working on that involves a flying saucer. Stay tuned for details!

Posted by juniorbirdman at 7:16 AM No comments: