Samples of sound design from the feature film "Solitude", a horror anthology directed by Taylor Scott Olson and Livingston Oden.

The film's plot spans almost a century, from the 1930s to the present day, as several generations of the Ericson family fight a mysterious evil haunting the woods and river on their property. Each time period in the film is portrayed in the style of a horror movie from that era, framed with a contemporary plot line.

Sound design for the film often centers around moments of extreme violence, as character after character meets a grisly end. I brought to bear impacts against a variety of surfaces (flesh, dirt, leaves, wood, stone, etc), as well as a heaping helping of fruit and vegetable abuse (recordings of sliced cabbage and the squeezed innards of oranges came in most handy). The sounds are carefully layered to provide a robust presence at each frequency range.

I also created a variety of customized creature voices for the film. Hear some examples below:

The movie beat out "Wild" and "The Imitation Game" to win the Audience Award at the 2014 Twin Cities Film Festival, and creature designer Darla Edin won a slot as a contestant on "Face Off". Stay tuned for more info as "Solitude" makes its way out into the world.

Posted by juniorbirdman at 9:03 AM No comments:

Sound design for this Web-based collectible card game from the Bay Area's Menchie Entertainment. The wizards of Mage Rage "studied magic theory for so long that they forgot how to actually use it." See and hear a highlight reel below:

Menchie's Dmitry Sokolov sought me out to deliver sound effects that were visceral, gritty, and textured. I obliged with a blend of library and custom cues, spending some time grinding bottlecaps and a hinge into a concrete block to add a little more grit and friction.

I also used the object pictured below-- I believe it's some sort of kids' toy-- from which I've coaxed all manner of friction, creaks and clanks: 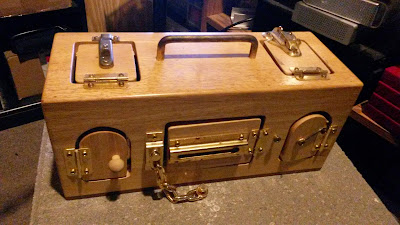 Below: an audio-only demo of the sound effects I provided for the game.

Mage Rage is an entry in the 2015 Independent Games Festival. You can play the game online here.

Posted by juniorbirdman at 7:18 AM No comments: