Deep Cuts #8: Eyes Without A Face 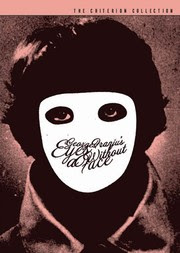 (Just in time for Halloween, the "Deep Cuts" series highlights horror films I think deserve a little more recognition. Not to say they're obscure by any means-- most are major releases. I just want to give them a little more love is all. Enjoy!)

Index of all "Deep Cuts" entries, updated as they're posted

This has to be the toughest going of any of the films under discussion in this series-- some harrowing gory moments. But it has a haunting quality that makes it one of my favorite horror movies, hard to watch though it may be.

Christiane Génessier, daughter of a brilliant surgeon, has suffered disfiguring facial wounds in a car accident for which her father was responsible. Dr. Génessier tries to rectify the situation by kidnapping young women, surgically removing the flesh of their faces and grafting it onto that of Christiane, who otherwise wanders the house wearing a white mask, almost literally a ghost (she's been officially pronounced dead). 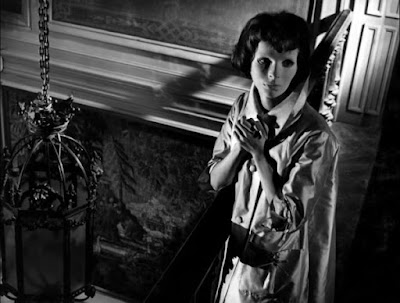 Oddly jaunty music, evocative of a circus, accompanies the film at odd moments, usually at contemplative points that wouldn't be scored in other films. The grisly operating room scenes, on the other hand, are presented clinically and without any of the atmospherics often employed by horror films. The point, clearly, is not to entertain us with mad-scientist theatrics. This ain't Vincent Price. This is-- man, I don't know what this is. 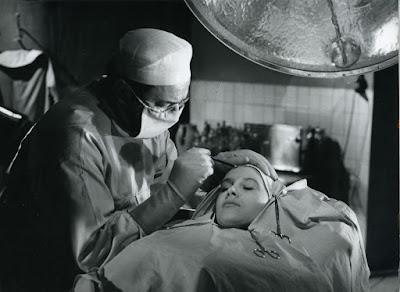 And indeed, what *is* the point of all this? The film is generally presented as a naturalistic drama, which heightens the horror of what's actually going on. One doesn't get the idea that the gruesome goings-on are all just for the heck of it, thrills for thrills' sake-- in fact there are no thrills to be had, just a dolorous interweaving of trauma, guilt, revulsion and denial. 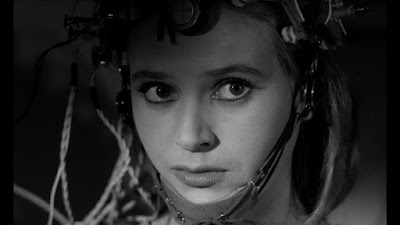 I don't pretend to know the thematic underpinnings, but I've gotten the feeling that "Eyes Without A Face" somehow references the Nazi occupation of France-- which, having ended a scant 15 years or so before this film's production, must have been pretty fresh in people's minds at the time.

It turns out that critics have bickered over this and other political interpretations quite a bit. In Shocking Representation: Historical Trauma, National Cinema, and the Modern Horror Film, for example, Adam Lowenstein positions the film as evocative not only of the Occupation but of the Holocaust and France's incurion into Algeria as well. And so on.

Which is a terrific point to segue into 80s pop music! It's worth noting that this film is-- as far as I'm aware-- the only 1960 French horror movie with a Billy Idol song named after it:

One of his better songs, I'd say-- and although it doesn't seem to have all that much to do with the aforementioned, backup vocalist Perri Lister is in fact singing "Les yeux sans visage" (the film's French title) in the background, so that's something.

Mike Hallenbeck home page
Posted by juniorbirdman at 9:55 AM