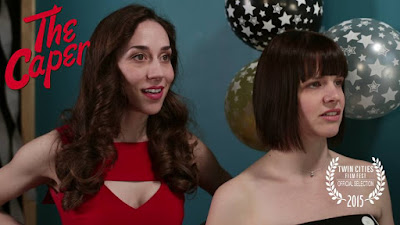 Happy New Year, cyberspace! 2015 has been an incredible year for me, and I'd like to thank all the collaborators who made it such a blast.

Can't wait for 2016-- looking forward to all it has in store. Let me know what I can do to make your next project sound great.

This comedy-horror short spent the year vacuuming up awards across North America. A cautionary tale about a Roomba gone rogue, and a great experience seeing what director Andrew Hunt could pull off with a dream team of collaborators. More info

"The Curse of the Invisible Werewolf" is a short film directed by Jay Ness, a tribute to classic monster films of the 30s and 40s. Both the film and its trailer (above, released Halloween 2015) feature my sound design and an original musical score. More info

OUT IN THE COLD

Sound design for a documentary feature directed by J.D. O'Brien, aimed at raising awareness of issues related to homelessness. Won Honorable Mentions for both Best Documentary and Indie Vision Breakthrough Film (the latter in the company of a Charlie Kaufman film, no less!) at its 2015 Twin Cities Film Festival premiere. More info 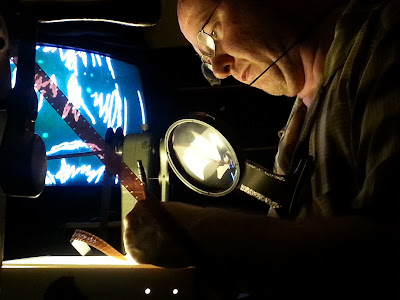 A highlight of 2015 was the chance to provide a live soundscape for this unique showing of 16mm experimental films by Trevor Adams at Bryant-Lake Bowl's "Cellular Cinema" series, curated by Kevin Obsatz. Quite simply, a blast. More info

The 2015 Twin Cities Film Festival offered four pieces featuring my work: the documentary Out in the Cold, shorts The Caper and Clean Cut, and the Season Three pilot of web series Theater People, the latter of which launched later in the fall (see music highlight reels here and here). With the exception of "Clean Cut", each was a world premiere. I met a lot of great new folks, and had the pleasure of seeing two pieces I worked on ("Out in the Cold" and "The Caper") win a total of three awards. Thanks to everyone whose efforts make this fest a success!

Clean Cut careened from Tijuana to South Dakota to Mexico to West Virginia, then back to MN for TCFF.

"Deux Champs", a black and white documentary by Kevin Obsatz featuring my sound design and original score, screened at NYC's Anthology Film Archives as part of New Filmmakers 2015. It also screened as part of an event hosted by Portland, OR's Compliance Division, as did Trevor Adams' McFowl, a film I scored back in 2014.

Original musical score for this romantic comedy short directed by Matthew Anderson. "The Caper" won an Honorable Mention for the Audience Award upon its premiere at the 2015 Twin Cities Film Festival. More info

Cartoons that definitely aren't for kids! From the ingenious mind of Josh Stifter. More info

John Akre's experimental animation "Mirrororrim" premiered at Cellular Cinema III: The Double and showed subsequently at the 2015 Square Lake Film Festival, and then Chicago's Zhou B. Arts Center as part of the Twisted Oyster Experimental Film Festival. It even made it into Minneapolis/ St Paul Siggraph's MN Electronic Theater presentation, alongside work by Sparkhouse and Ghost Productions for which I'd provided sound design and/ or original music. More info

Posted by juniorbirdman at 9:26 AM No comments: 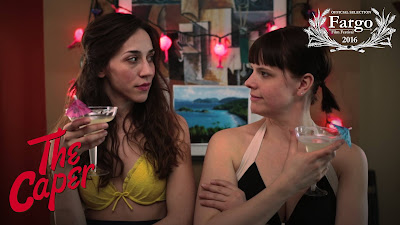 A little later in 2016: “The Caper”, a comedy short by Matthew Anderson featuring my original musical score, will screen at the Fargo Film Festival in March.

Posted by juniorbirdman at 10:51 AM No comments:

While the Wendy's Grill Skills training video has long been the stuff of legend among corporate infotainment enthusiasts, it wasn't till recently (yesterday, in fact) that I became aware of this lost gem:

Not unlike "Grill Skills", this piece offers some real innovation in the genre of artisinal hip hop. Thanks to Mike Rylander for bringing it to my attention.

I found some other work in the "related videos" column which I could share with you-- I have, however, chosen not to do so. Sometimes I watch this stuff so you don't have to.

It makes me wonder, though, how much of this material from the VHS era lies dormant, neglected, left behind by the digital rapture. It haunts me.

Pure gold. Thanks to John Kannenberg for alerting me to this.

Mike Hallenbeck home page + contact
Posted by juniorbirdman at 9:39 AM No comments:

The History of Animation Sound 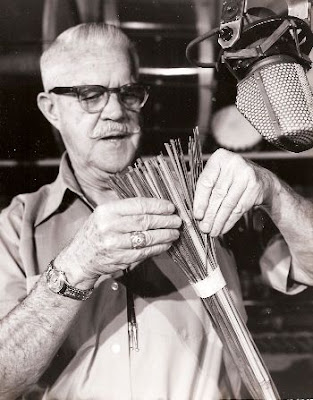 Nice recent piece by Kate Finan of Boom Box Post exploring the history of animation sound. Thanks to the Designing Sound blog for bringing this to my attention. The article goes into the processes used by Disney, Warner Brothers, Hanna-Barbera, etc...

Which reminds me of this lovely featurette from "Wall-E", wherein sound designer Ben Burtt ("Star Wars") relates the history of Disney's animation sound process in some detail, then tours the facility and demonstrates some of the sound tools used in the toons. I'll add it as a bonus here: 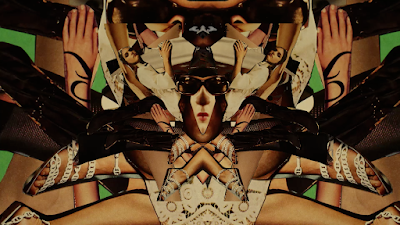 “Mirrorrim” will appear as part of the MET 2015 Show Reel, which plays at 7:30 PM. The program offers digital animation ranging from indie pieces to corporate VFX demos-- a wide spectrum of material.

If you're in the Twin Cities, come on by!

Mike Hallenbeck home page + contact info
Posted by juniorbirdman at 10:06 AM No comments:

Last night I had the pleasure of witnessing a live presentation of the films documented in the book and CD set Everything's Coming Up Profits: The Golden Age of Industrial Musicals (hit the preceding link for some background on this material from a previous post of mine). And I sure wasn't disappointed; the book's author Steve Young served up a weird and wonderful event, replete with footage of corporate infotainment unavailable anywhere else. A mindbending evening, for those who are into this sort of thing.

More shows coming up in the Midwest this week, too. Check the tour schedule for details, but here are the basic facts:

As part of the lineup, we also got to see an excerpt from an in-progress documentary about the films. There's an affordable CD set for sale, available only at the live shows. Check it out!

Posted by juniorbirdman at 11:15 AM No comments: