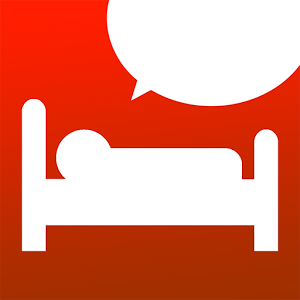 This month: Lots more declarations of things I allegedly do, or things I should do... plus a bit of Borgesian doubling that harkens back to the days of "I have an extra one of you... I keep it out in the car for emergencies". And of course, the baldness. Always the baldness. Enjoy!

"There's only one button you can press... it's rewind... You can sit here and wait for a long time... you probably will. Sit here and count quarters... To put them in the laundry... You could finance your own campaign."

"Get that tweetable... all the news."

Jen: "You should make your own kind of soap with all the different flakes."
Me: "Um... why should I do that?"
Jen: "Because that's what everybody does."

"Yeah. What is the thing about you?... All the furniture is green that's in here. It's a special house that you could live in... Yeah. You have your own train. That's the right one."

"You should find some trees... They'll help you grow your business... The trees would vote for you... If we ever move, then we'll live in a different city."

"I was gonna say this was my hip decoration."

"It's you. That's all there is to say about you bald people... Yeah. You ride around on your mongoose."

"Do you like kitties behind their backs? How many of them are there, and how many want to snuggle you?... A plastic dinosaur."

"You still live here. You're on the right side of things... The place where all the bald people go hang out."

"You should get a window machine. It's going up and down, just like you are... Do you really live here?"

Jen: "You should have yourself made into a sticker."
Me: "Really? What kind of sticker?"
Jen: "Like a picture of any of your other ideas... it's just a whole different worldview."

And our grand prize winner this time around:

"You're the presumed front-runner."
Posted by juniorbirdman at 10:02 AM No comments: 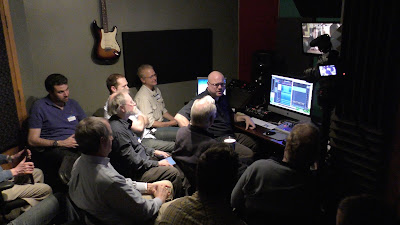 It was my pleasure to host a monthly meeting of the Minnesota Professional Videographers Association at my studio Junior Birdman Audio last week.

The Association provides an ongoing forum for continuing education and skills enhancement in all phases of professional video production. It was a lot of fun to talk post with some curious video folks who encounter audio challenges on a daily basis, and to share some techniques I use to make their work sound better.

I issued a request ahead of time for members to send me a problematic audio clip that I could demonstrate fixing. Tim Oberg complied with an excerpt of an interview recorded in an echoey Guatemalan classroom, marred by quite a bit of hiss and extraneous noise from outside the school (including a squeaky swing set). During the meeting I went through some techniques I use to scrub audio like this-- including EQ, de-noising, reverb removal, and spectral waveform repair. 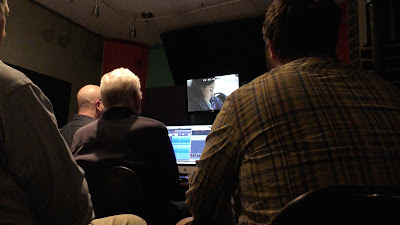 I also demonstrated some of the Foley and ADR I've been producing for Dave Ash's upcoming feature film Twin Cities, combing through the individual tracks and then assembling a mix from all the disparate pieces. I also gave a brief presentation on the principles involved in convolution reverb.

It was a blast to share some knowledge with video professionals, and to get more of a sense of what their needs are. Thanks to Timothy Daniel Johnson for setting up the event, and to Allan Block for the images posted here!

Music by Mike Hallenbeck for film

Posted by juniorbirdman at 9:43 AM No comments: 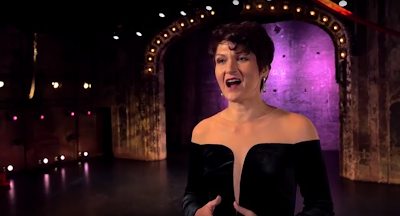 I recently provided sound edit and mix for this highlight reel promoting the services of hypnotist Amye Scharlau.

Time was of the essence; I received the deliverables in the morning and needed to deliver ASAP. Interval between receipt of assets and delivery of final mix: 2.5 hours. 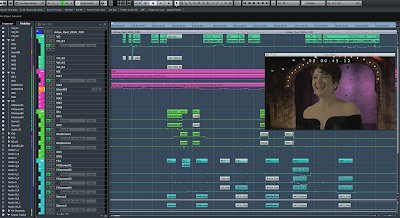 Many of the audience reaction audio clips were distorted past the point of usability, so I swapped in cues from my library as substitutes. Dialog edit was as forensic as time permitted; some EQ, de-noising and a bit of spectral waveform repair here and there.

Thanks to Jason Schumacher for bringing me aboard for this project!

Junior Birdman Audio Home Page + Contact
Posted by juniorbirdman at 9:57 AM No comments:

"Infestation" screens in Italy! On a raft, in the middle of a river!

I'm excited to announce that Infestation, a short experimental animation by Cable Hardin for which I provided sound design, will screen at the River Film Festival in Padua, Italy on Friday June 10th, 2016. Check out the details from the festival's web site below to see how cool this fest is:

"We show the films... onto our screen that floats on a raft moored in the middle of the Bacchiglione, the river that has always linked the two great medieval cities of Padua and Venice, at the old river port, Porta Portello. A metaphor and a reality of communication, of continuity, of movement, liberty, independence and of life that are the key to, and which embody, the spirit of our festival. The audience sits on the tiers of steps where for six centuries goods were loaded and unloaded at the river port."

As a wise man once said: How cool is that?

One of these days I'll publish a more in-depth account of the sound design process for this short, which involved a lot of fun voiceover work and original field recordings by yours truly.

Andrew Hunt’s “Personal Space”, a short thriller featuring my sound design, won Best of Fest and a host of other honors at Z-Fest this year; my work earned a nomination for Best Audio/ Sound Design. In this entry I'll go into some details on process. But first, here's the finished short:

Given its subtlety, I was pleasantly surprised that this film was recognized to the degree it was-- especially given the overall high quality of Z-Fest films this year. Which is not to say the film is simple or facile in any way-- it was far more ambitious than 2015's Clean Cut, which earned about as many awards but was a lot more extroverted and comedic.

"Personal Space", on the other hand, builds from a sense of silence through layers of tension to a twist ending. Hunt, DP Ryan Grams and the rest of the team put together some impressive visuals on set. And it is a set; that's not really somebody's apartment, though some of the seams were removed digitally.

Other than breaths and gasps from its protagonist, the film contains no dialogue. I'm indebted to location mixer Jenilee Park for her skillful on-set recordings-- especially of actress Molly Ryman's vocalizations, which were recorded "wild" and synced up with the visuals later.

Which left the rest of the soundscape to piece together once the visuals were assembled. Editor Jeremy Wanek likes to place sound effects as he assembles the visual cut, so I provided as many effects as I could up front, before even seeing a frame of film. Hunt also added a variety of sounds to the timeline before I ever received it. Given all this input, plus the welcome feedback of producer Jason Wallace, the sound design of this piece was truly collaborative.

My sound design work focused on the grit and textures in between the main audio events. To this end I employed a variety of objects I keep around for such needs, including the ill-defined box I've called upon so many times before. In this case it helped to sweeten fumbling with the chain at 2:38: 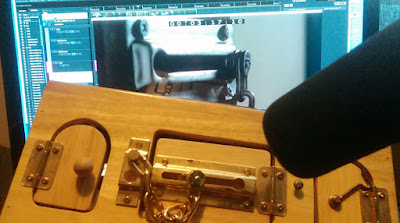 My trusty squeaky hinge also came in handy for the latch at 1:20, as did the block of stone I often use for rough, scratchy textures. And I performed original Foley effects for small moments like plugging in the phone cable and putting the phone down on the glass table surface (with the cable rattling in between) at 2:26. 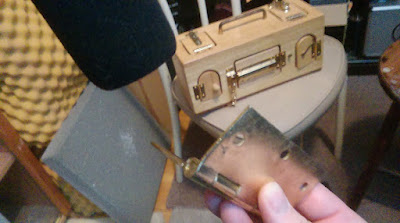 One curious note (spoiler alert): at about 5:10, we originally included a sound that clearly indicated the hooded figure was entering a different space. We got some feedback from a test viewer (thanks, Lindsey!) that it sounded like the hooded figure was in fact exiting the closet and re-entering the living room, which of course wasn't what we wanted. So Hunt decided the best thing was to replace that passage with some sort of ambiguous sound effect that confused the issue rather than communicating anything-- a rare example of using sound to intentionally obfuscate the storytelling rather than clarifying.

Nathaniel Levisay's score was a real gift: he sent us stems of each individual instrument, which allowed us to experiment with different arrangements and timings of each cue. I was tasked with (spoiler alert #2!) treating the audio of the cassette player, particularly the warbling quality of its pitch. Hunt brought over the actual cassette player used in the film, which produced a wonderful dilapidated warble until I tried to record it, at which time it worked perfectly. So I wound up simulating the warble digitally using variable pitch shifting, which worked just fine.

Thanks to everyone who worked so hard to make this film happen-- it was a true group effort, and a worthwhile one at that! 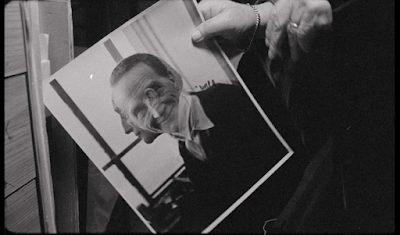 A tardy failure to announce something that is now in the past tense by mere hours: Kevin Obsatz's experimental short documentary "Deux Champs", for which I provided sound design and an original musical score, screened tonight at the Milwaukee Underground Film Festival.

If you found out about this some other way, and went and saw it, then I hope you enjoyed it!

Shot on a Bolex in black and white, the film is narrated by a relative of Obsatz who once shot an accidental double exposure of Marcel Duchamp that eventually wound up in a retrospective at the Museum of Modern Art.